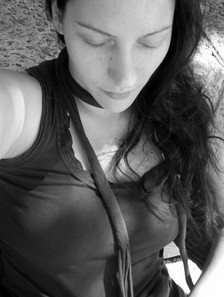 Ana Gnjatović (1984, Serbia) – composer, performer, cultural manager, composes music to look at and listen to. She studies the doctoral program at the Department of Composition at the Faculty of Music in Belgrade.

In 2007 she graduated from the Marketing Institute for Commercial Management of Dorset. She works as cultural manager, and as assistant at the Faculty for Culture and Media of the Megatrend Univeristy in Belgrade. She is the creator and organizer of the KoMA festival.

Dialogue, quasi una serenata (2008) is the last act of the musical performance oorto’s cloud. And the last failure in communication. For two.