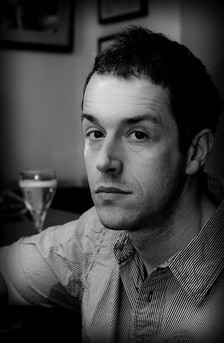 Marko Matović (1977, Serbia) graduated in composition at the Faculty of Music in Belgrade, with Srđan Hofman. During 2009, he worked as a program editor of the Symphony Orchestra of the Radio Television of Serbia. At the moment, he is a freelance artist, whose interest is contemporary, applied and electronic music. He generally writes chamber and orchestral compositions, exploring through them influences of the popular musical trends on the “high” contemporary music. His works were performed in Belgrade and Apeldoorn. He composed music for over twenty theatrical works, as well as various films. He received four awards for theater music: JoakimFest in Kragujevac, festivals in Trebinje and Kula. He lives and works in Belgrade.

Bearing in mind the propositions and demands of this contest, I wanted to achieve musical dramatization precisely through the structure of music material.

Four Vagabonds (trumpet, horn, trombone and bassoon) represent four street musicians. With their music, they try to gain attention and sympathy of busy passers-by. In an effort to get in contact with their public, they often change mood and character of the music. By changing atmosphere, the vagabonds create most diverse interrelated sonic constellations. Their music goes from grotesque disharmony, through marching and ceremonial expression to lyrical coordination and tranquility.

The vagabonds tirelessly play in the hope that somebody will stop to hear them or throw a coin.