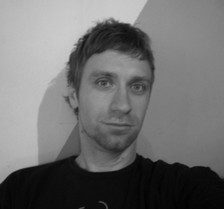 Ljubomir Nikolić (1976, Serbia) finished his primary musical education in Tuzla, at the accordion department, and he continued his education at the Music School „Isidor Bajić” in Novi Sad, also at the instrumental department. During his studies,he joined the ensemble for contemporary music NEW ART FORUM, led by composer Nineta Avramović. The ensemble performed his pieces Little Story for flute and piano and Suite No. 1 for piano.

He received the Best Student Award after his first years of studies. In 1997 he was the first prize-winner of the composition contest Days of Josif Marinković in Bečej, for the solo song The Triumph of Venus. Also, in 2009 he was the double laureate of the Serbian National Competition for percussion instruments – he won the third and second prizes for the works Marimbophonia and Drops.

For two years, while being president of the Student’s Union of the Academy of Arts, Nikolić was an active organizer of contemporary music concerts. He is a member of the Association of Composers of Vojvodina.

Most of his compositions are in the repertoire of instrumentalist from Novi Sad, and his works have been recorded for the Radio Television Novi Sad. A CD with the retrospection of his works entitled Foreign Body has been released as a joint project of Matica srpska and the Association of Composers of Vojvodina.

Drops(Kapi) for percussions(2008)
The composition was created on the occasion of The Serbian National Contest for Percussions. Explaining the name of the work, the author highlights that it is not only about echoing and imitating water drops, but also about evoking a deeper, metaphoric meaning of a “drop”. Namely, it points out the importance of water in an ecosystem, as one of the most valuable natural resources and warn about a possible “water crisis” that threatens the entire humankind (a gran cassa motif).