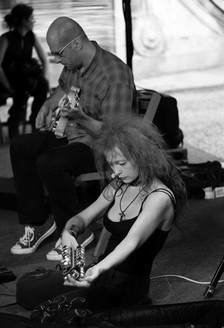 Sorin Romanescu & Irinel Anghel Duo is representative of the Romanian experimental music. They are known as promoters of an alternative aesthetics, of bold, innovative and original creations. Composers and performers of their music, Sorin Romanescu and Irinel Anghel has created and presented many experimental performances such as Magic, Shopping in ParadoXphere, Talking to my Fears, Rebirth, LoveBubbleStory, Variations on False Themes and some other Illusions, developing a personal direction based on their common ideas, curiosity, spontaneous chemistry and challenging attitudes. With the Vortando project they have opened the “gate” of innerworld music, playing blindfolded inside the interactive “Egoctopus” visual concept and installation created by the Romanian artist Raluca Ghideanu.

Sorin Romanescu studied composition at the Bucharest University of Music and jazz music at the “Titu Maiorescu” Music Academy in Bucharest. He plays jazz, improvised music, contemporary acoustic and experimental music in Romania and abroad, together with many well known artists and ensembles. He received the Prize for the Best Romanian Jazz Musician in 2008 from the Muzza Foundation and the Romanian Composers Association.

Irinel Anghel (1969) Romanian composer, pianist and improviser. Her activities are devoted to experimental music. She studied composition with Octavian Nemescu at the National University of Music in Bucharest, where she graduated in 1996 and earned her MA in composition in 1997 and PhD in composition in 2003. Among her many honors are First Prize in the competition of Romanian Radio (1998, for Mondes Impossibles I), four prizes from the Romanian Composers Union (1998-99, 2002, 2004) and the Prize of the Romanian Academy of Arts and Sciences (1999). She was a composer in residence in Belgium (2000) and the recipient of a grant from the Ernst von Siemens Musikstiftung (2002). She received the Uchimura Prize from the International Theatre Institute/UNESCO for stage music (2002, shared with the creative team of The Bloodied Lovers), the prize of the journal Actualitatea Muzicala in Bucharest (2003, for her work with Pro Contemporania Group), the Camajani Fellowship from New York University (2003, to lecture there), and the International New Music Consortium Award in New York (2003, for her work in all areas of new music). Her music has been performed in Albania, Belgium, France, Germany, Israel, Italy, Japan, Canada, The Netherlands, Poland, Romania, Sweden, Switzerland, and the USA and has been broadcast throughout the world.