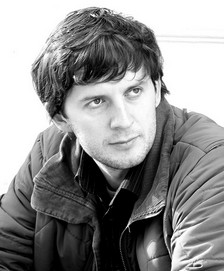 Marcin Stańczyk (1977, Poland) graduated from the University of Lodz, Faculty of Law in 2002 and then from the Academy of Music in Lodz, Faculty of Music Theory and Faculty of Composition with Zygmunt Krauze. Currently, he is a postgraduate student of Academia Nazionale di Santa Cecilia in Rome with Ivan Fedele. He participated in several international events: Young Composers Meeting in Apeldoorn (Holland), La Biennale di Venezia, Gaudeamus Music Week, Darmstadt International Summer Courses for New Music, Warsaw Autumn among others. As a composer he has won seven international composers competitions in Poland, China, Italy, Holland, Romania. He also obtained several scholarships  (“Young Poland” founded by the Ministry of Culture and the National Heritage of Poland, scholarship of the Society of  Polish Authors and Composers,  scholarships of Italian Government, Stipendenpriese of Internationales Musikintitut Darmstadt). He takes part in a 4-years program for young European composers founded by the European Penderecki Centre of Music (2007–2010).

Three Afterimagesfor double bass (2008)
In the mid-20th century Polish avant-garde painter Wladyslaw Strzeminski published his series of solaristic paintings he referred to as the afterimages of light. These works record optical impressions caused by looking at the sun.  It is possible to observe them by looking at the sun and then abruptly looking at a white sheet of paper. At that moment we can recognize the reflection of light, blue traces in contrast to yellow. Reflections of sounds are their harmonics. Relations between them create consequent parts of the work; contrasting arrangement, fluid passages from one to another and at the end return to the contrasts from the beginning.

This piece received honorable mention at the 2010 ISB/David Walter Composition Competition organized by the International Society of Bassists in San Francisco.