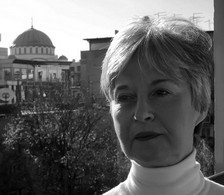 She worked for Belgrade Radio and Television from 1985 till 1991, as the Editor of the Sound Workshop programme, and from 1989 as Music Editor of Radio Belgrade.

In 2001, Director for Cultural Projects at the Centre for Democracy Foundation, 2001/6 Art Director of BEMUS, 2007/8 State secretary in the Ministry of Culture.

Ivana Stefanovic is involved in fringe music areas and music for theatre.

She writes about music and culture.

I wrote The Poet in a Glass Box – a Fairy Tale (Pesnik u staklenoj kutiji – Bajka) to the initiative of the Cantus Ensemble, and to Cantus I dedicate it.

The piece tells nothing important. Its subject matter is small, since for me currently there are no “big” issues. That is why this piece was conceived as a fairy tale, sound illusion made of memories, signals, symbols, childhood, innocence and banality. “The poet” deals with “knick-knacks” and nothing else.

The sentence: “My life is a lovely story…” comes from the great magician of the childhood, Hans Christian Andersen. He begins his autobiography – The True Story of my Life – with this sentence. Still, anyone could write it – nothing makes it unique.

The central motivic element of the piece comes from “the antique shop”. It originates from some children literature – never mind which and what – but this element is not subordinated to any specific procedure, it is simply fragmented and hypertrophies in time. The piece should be understood as a frozen moment, the piece of something (“My life…”?) that regenerates again and again. I do not avoid here a “déjà vu”, I seek it, and go towards it, all the way to auto-irony and persiflage.