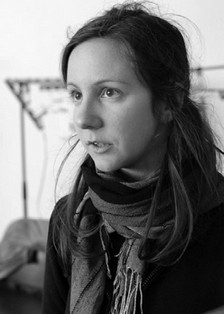 Teodora Stepančić (1982, Serbia) lives and works in the Netherlands. She is active as a composer, pianist, performer and an improviser.

She is also one of the founders of a few ensembles based in Holland: SZ, Modelo62, D€N HAAG A££$TAR$ €N$€MB£€. At the moment, she is preparing tours and concerts around Great Britain, Holland, Switzerland, Germany, Norway and Iceland with different programs including premiers and renderings of works of contemporary composers (Michael Phenicie, Janko Ferndaun, Justin Christensen, James Tenney, Clarence Barlow) and concerts of free improvisation.

Aluminum Obsession for voice is a composition in which aluminum plays an important role in modifying sound – in this case, a simple melody for a solo voice. Similarly, aluminum is an important visual and dramaturgical element, as a performer “prepared” his voice with aluminum and other objects. This composition was written for Lovorka Holjevac who performed it for the first time in 2007 in The Hague.