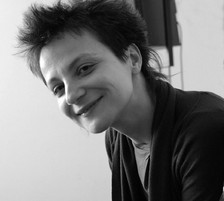 Jasna Veličković (1974, Serbia) studied composition at the Faculty of Music in Belgrade with Srđan Hofman. Since 2001 she has been living and working as a composer in the Netherlands where she completed a Masters in music at the Royal Conservatory with Louis Andriessen, Gilius van Bergeijk and Clarence Barlow.

Jasna Veličković is co-founder of CHINCH – Initiative for Research and Production of Contemporary Music, “Live” and Visual Arts and Walking Theory group.

Lives as a free lance composer in Amsterdam.

‘’shadow study #6’‘  is the sixth piece in a series of works under this name, on which the composer has been working since June, 2008. A common procedure for all studies is the use of hand-built “magnets” causing vibration/reasoning of an instrument. The piano, mbira, kalimba, zither, metal objects are just some of the instruments/objects used in the previous studies. The basis of all studies is sound. Compositionally, each study differs in form and content.

shadow study #6 for amplified harp, percussions and electronics was written upon the invitation of Belgrade harphist Milana Zarić.