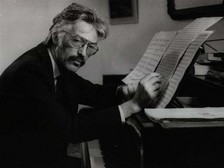 Aleksandar S. Vujić (1945, Serbia) – composer, pianist, conductor; graduated in piano (1968), composition and conducting (1983) from the Belgrade Faculty of Music. During his studies he was awarded four times as a student with the highest average mark. His pieces were published in the USA, Germany, Italy, Hungary and Serbia. Exclusive publisher of his choral pieces is Synkope Verlag from Germany. There are more than two hundred US choirs performing his pieces (according to the sale reports from Mark Foster Music Edition and Santa Barbara Music Publisher). He was awarded with the Zoltan Kodaly Medal of Hungarian Government (1983), with the Israeli State Medal (1988). He was the visiting artist at the USIS (USA, 1987). In 1999 professor Max Frei gave a lecture The Portrait of the Composer Aleksandar S. Vujić in Rotterdam at the Fifth World Choral Music Symposium.

The composition Niška Banja (The Spa of Niš, a small Serbian town near the city of Niš) for four trombones was written with no great aspirations. It is a piece that should be understandable to a wider audience, for musicians to enjoy while playing it, without pretensions of being the ultimate in avant-garde music. We’re all witnessing the dead-end which contemporary serious music (some refer to it as “classical”) has reached – empty concert halls with few listeners who happened to be there, as if they were members of a not so influential sect. In order to return to ourselves and to our listeners we must create a musical language accessible not only to the chosen few who usually complain they weren’t properly understood. The more philosophical talk on contemporary music, the less music there actually is – that is why I let the piece speak for itself. The main theme is the folk song Niška Banja interwoven with a kolo (round dance) in an 11/8 meter.