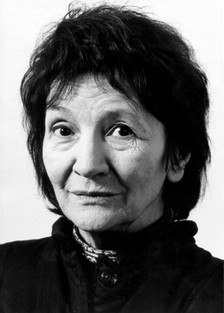 Ljubica Marić (1909–2003), composer, member of the Serbian Academy of Sciences and Arts, one of the most original creative personalities in Serbian music of the 20th century. She studied violin from the age of eleven, and shortly afterwards she began to be involved with composition, which she studied with J. Slavenski and M. Milojević. In 1929 she graduated from Belgrade School of Music (now school Mokranjac). She continued her studies in Prague, composition with Jozef Suk at the Master School of the Prague Conservatory, violin with professor Maržak and conducting with professors Doležil and Nikolai Malko. At the same time she studied fourth-tone system with A. Haba. She graduated from the Master School of Composition in 1932.

In 1933 she participated in the festival of the International Society for Contemporary Music in Amsterdam, with her Wind Quintet, and in the same year she conducted her Music for Orchestra at Session d’ etudes musicales et dramatiques in Strassbourg, according to H. Scherchen’s plan. Subsequently, in 1934 and 1935 she conducted in Belgrade, 1937 in Prague (for Prague Radio), and only in 1945 and 1946 at public concerts of Belgrade Radio.

Between 1938 and 1945 she taught at the Stanković School of Music, 1945–1967 she was assistant professor and afterwards professor of the Music Academy in Belgrade. 1947–1953 she was the Secretary of the Serbian Composers Association.

Immediately after World War Two she produced a certain number of piano pieces, songs and Sonata for Violin and Piano, but her most creative period was between 1955 and 1963, with compositions: cantata Songs of Space (representative of Yugoslavia at the World Exposition in Brussels 1957), Passacaglia for symphony orchestra, Musica Octoecha No.1, Byzantine Concerto for piano and orchestra, Threshold of Dream – a chamber cantata for three soloists and chamber orchestra, Ostinato super thema octoiha for chamber orchestra and piano solo…

She became a corresponding member of the Serbian Academy of Sciences and Arts in 1963, and was admitted to full membership in 1981.

Asymptote
Asymptote for violin and chamber string orchestra was written after the composer’s considerable hiatus in composing. Apart from the title, reminiscent of philosophical and mathematical thinking, Asymptote is characterized by sporadic quarter-tone relations in the violin part. The title Asymptote, in itself, represents a symbol of man’s struggle to achieve the life’s goal: a curve and a straight line extending in the same direction, eternally, approaching but without touching each other.

Torso
Torso is the title of a piano trio referring to its own form, reduced in this case to the very core. The inspiration for the trio stems from the two poetic texts: a medieval one (14th century), and a single line by our great poet, ruler and philosopher Bishop Rade – Petar Petrović Njegoš, which reads: “Isn’t reality more bewildered than the dream itself“.