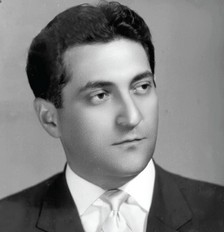 Aleksandar Obradović (1927–2001, Serbia) studied composition at the Music Academy in the class of Mihovil Logar, graduating in 1952. In 1955, he became a teaching assistant at the Music Academy, in 1962 an assistant professor, in 1969 an associate professor, and in 1975 a full professor. He wrote the first textbook of orchestration in Serbia (Uvod u orkestraciju / Introduction to Orchestration), which was translated to Italian. On two occasions he pursued further specialist education abroad: with Lennox Berkeley at the Royal Academy of Music in London (for a semester in 1959–60) and at the Electronic Studio in New York (1966–67). He occupied a number of important posts in public life, most notably that of Secretary General of the Yugoslav Composers’ Association (1962–66) and Rector of the University of Arts in Belgrade (1979–83).

In his creative work, Obradović showed a special affinity for large-scale symphonic, vocal-instrumental, and concertante forms. Especially noteworthy in his extensive oeuvre encompassing around 200 works are the following: eight symphonies; Preludijum i fuga (Prelude and Fugue) for a large orchestra; Askeza (Ascesis) for a large string orchestra and celesta; Kroz svemir (Through Space),a suite; Epitaf Ha for symphony orchestra and tape; concertos for clarinet, violoncello, violin, and piano; and two cantatas, Simfonijski epitaf (Symphony Epitaph) and Sutjeska. He was one of the first Serbian composers to work with electronic sounds. Obradović has won 25 awards for his work in composition, most notably an October Award of the City of Belgrade for Simfonijski epitaf (1959) and a July 7th Award of Serbia (1980) for his entire oeuvre. His works have been performed in 115 cities in 33 countries.

Microsonata for solo clarinet was dedicated to clarinettist Milenko Stefanović, who was the first to perform and record it in 1969. In this work, the composer explores the expressive abilities of multi-phonic writing (from two to four parts), producing a compact form with a clear tri-movement structure (Prelude, Arietta, Fughetta).