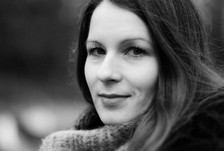 Petra Strahovnik (1986, Slovenia), born in Celje, finished composition with Uroš Rojko at the Music Academy in Ljubljana (2011) and Mater Composition with Martijn Padding and Peter Adriaansz at the Royal Conservatoire in The Hague (2014) for which she was receiving scholarships from the Slovenian.
Ministry of Culture and Municipality Žalec. Her composition Between East and West for 4 percussionists won the MusMa Festival award and was later performed in 5 countries across Europe. In April 2012, she won the Jury and the Audience award at the international competition.
Bienale Koper with her piece Awareness. In September 2010, Mr. Trowell (England) granted her a scholarship for Gaudeamus Music Week, Amsterdam. In January 2011, Petra received Academic Prešeren Award for her musical achievements. In 2013 she got commission from Diamant fabrik Netherlands to write an Opera (Becoming the System) which the premier was in December 2013 and got amazing reviews.

Attraction for flute, clarinet, trombone, viola, violoncello, piano and percussion. Attraction, this word, with so many meanings, got my attention many years ago, when for the first time, I used rare earth magnets to attract the strings and with that, changed the mechanism of the instruments.
With this word I connected to several theories and topics.
One of them is questioning the origin of attraction. From the idea, to the written piece, to the performance and finally to the listener. What is the attraction’s material? Physical/biological, emotional, intelectual?
The other, more important is the question of the freedom of thoughts.
How, why, etc. for now is not important. What is, is to have blank piece of paper infront of you, every time before you enter this OR any sound/art world.