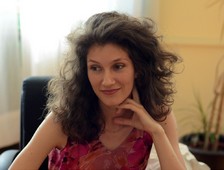 Ana Kazimić (1985, Serbia) holds a BA and MA degree in composition from the Academy of Art in Novi Sad. She also holds a DMA from the Faculty of Music in Belgrade; her final doctoral artistic project, supervised by Prof. Zoran Erić, was a dance fantasia titled Muerto de Amor. She is a laureate of the young composers’ competition held under the auspices of the Triorca Project (Norfolk County Council’s Music Service, England, 2012). A work by Kazimić was named the best entry at the international composers’ competition to mark the 1,700th anniversary of the Edict of Milan. She was among the five composers selected from around the world to take part in the 2017 Aurora Fine Arts Festival in Stockholm. Kazimić has appeared in piano, dance, and choral performances in Serbia, Spain, Portugal, France, Austria, Germany, Italy, and Hungary. In the season of 2013–2014 she volunteered and performed at the National Theatre in Belgrade (composition, choreographies, dance). Among others, her dance awards include first place at the 2013 World Dance Championship held in Hungary, which she won as part of her dance club team (Latina Blanka SM).

Her piece Auroriel was written at the initia-tive of the Aurora Fine Arts Festival, where it was premièred in Stockholm in August 2017. The commission demanded simplicity and personal expression in a piece for a solo instrument. The work was selected for another performance in Sweden, at the Grand Final concert of Höstfestival in November that year. Additional performances were scheduled in Stockholm and Vienna for 2018, and at the International Review of Composers Auroriel will have its Serbian première.