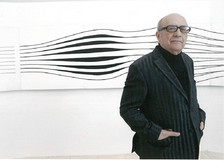 Vladan Radovanović (1932, Serbia) graduated in composition at the Belgrade Music Academy in the class of Milenko Živković. He initiated the foundation of the Radio Belgrade Electronic Studio, and was its head from 1972 to 1999. In 2010 he initiated the establishment of the Group for Polymedia Art at the University of Arts in Belgrade.
His creative domain is vocal-instrumental and electro-acoustic music, painting and computer graphics, literature, Tactilism, notation of dreams, Projectism, the Vocovisual, body action, and Art Synthesis. He has authored over 250 theoretical texts on music and new tendencies in the arts.
He has worked in experimental music studios in Warsaw, Paris, Utrecht, and Budapest. Radovanović’s compositions were selected to represent Yugoslavia at three SIMC festivals. He has had 28 individual exhibitions and performances at home and abroad.
He published 13 books, 2 maps, 6 scores, 2 authorial records, 2 cassettes, and 5 authorial compact discs.
He has been the recipient of 12 domestic and international awards for music (among them three first prizes at Yugoslav Radio Music Competition, October Award of the City of Belgrade 1971, Second Prize for electroacoustic music at Bourges 1979, Gianfranco Zafrani Award at the 1984 Prix Italia, First Prize at the 1998 International Review of Composers), 5 awards for literature (among them the 1968 Nolit award, the 2018 Todor Manojlović award) and 7 for visual arts (among them the First Prize of the Ministry of Culture for the best multimedia exhibition in 1992, the First Prize for video in Sao Paolo 1997, the First Prize of the City of Belgrade for visual arts in 2007, the 2008 Ivan Tabaković award, the 2012 Mića Popović award) and the 2014 Vuk’s award for making an outstanding contribution to the development of culture.
He is a member of the Serbian Composers Association and Serbian Fine Arts Association. Since 2001 he has been Guest Lecturer for Polymedia Arts at the University of Arts in Belgrade. In 2005 he received an honorary Ph D in music at University in Columbus, Ohio. In 2007 he received an honorary Ph D in Polymedia Arts at University of Arts in Belgrade, Serbia.

Furioso for two pianos was composed in 2017. I returned to this chamber genre after a long hiatus following my 1955 Third Sonata for two pianos. Whereas in the final movement of the Third Sonata I was coming out of neoclassicism, in Furioso I was intuitively oriented toward modern music as a mega-style. This piece likewise belongs to the cosmic sound tribe part of my oeuvre, as do all of my works composed after Devetoglas (‘Nine-part’). Naturally, its structure is not hyper-polyphonic, since it is mostly in four parts and a 12-note cluster appears only once in the entire course of the piece. The tempestuous musical flow of the opening and closing sections and the more serene course of the middle section of this tripartite piece are manifested in structures constructed in quite diverse ways. In terms of the work’s overall form, the third section is shortened, since its duration, as the final currently existing part of the piece, seems long enough compared to that of the related opening section, which by then lies in the perspective of the past.