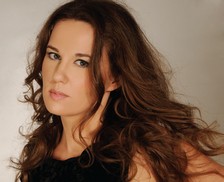 Branka Popović (1977, Serbia) graduated from both Musicology and Composition departments (composition studies with Zoran Erić) of the Belgrade Faculty of Music. She obtained her Master of Music Degree in Composition at the Guildhall School of Music and Drama in London (composition studies with Judith Bingham). She stayed for another year at the Guildhall as the Composition Fellow. She finished her doctorate studies in composition at the Faculty of Music in Belgrade (composition studies with Zoran Erić).
Her pieces were performed by many prominent performers, to name just a few – Austrian Ensemble for New Music, ARTéfacts Ensemble (Greece), Ansamblul devotioModerna (Romania), Stephen Gutman (UK), Ellen Ugelvik (Norway), The Construction Site, Ensemble Metamorphosis, Studio 6, St. George Strings, LP Duo and have been presented at events such as the World New Music Days (Bratislava, 2013), Reims Scenes d’Europe (2016), Átlátszó Hang (Budapest, 2017), International Spring Orchestra Festival (Malta, 2016), Festivalul International Meridian 2014 (Romania), 4th International Biennial of Contemporary Music in Koper 2014 (Slovenia), International Review of Composers, KoMA Festival of New Music, City of London Festival, Sir Harrison Birtwistle Festival and International Rostrum of Composers.
Her first chamber opera Petersburg was premiered in June 2012. She won a prize for trio Dream (I. S. o. F) for clarinet, violoncello and piano at the Summer Music Academy Budapest-Prague-Vienna 2002 and was awarded the Best Music in Film accolade for her work in The Breaking Point (directed by Igor M. Toholj) at the 56th Belgrade Short and Documentary Film Festival in 2009. Her piece Lines & circles… for recorder, trumpet, harp and accordion was elected among ten recommended works at the International Rostrum of Composers 2015 in Tallinn. In 2016/17, she was one of fifteen participants selected to take part in the CEEC Composers Fieldtrip to China. As part of the project, in December 2017, her piece The Music of the South for chamber ensemble was first performed by the Shanghai Conservatory of Music National Chamber Orchestra conducted by Wu Qiang. Her piece Stardust for viola and string orchestra was awarded 2nd prize at the London Music Society 2017 International Composer’s Competition.
Branka Popović is an assistant professor of composition at the Faculty of Music in Belgrade. Between 2010 and 2015 she was associate of Radio Belgrade 3 and from 2015 she is artistic director of International Review of Composers – festival of contemporary music.

14:30 for two pianos
14:30 is the moment when through the “confrontation” of two pianos – mechanical repetition, imitation and echo, the musical bending of time begins, initiated by nonmusical influences.