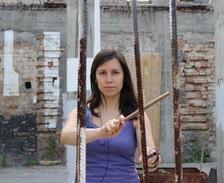 Maja Bosnić (1985, Serbia) is a composer and performer from Belgrade. In her music, she re-questions and examines accustomed phenomena in the process of music making, exposes them to concepts of every day life (habits of the society, modern trends, pop culture, science, etc.) then resets them in compositions that often include audience action in the performance. Bosnić is drawn to impossible missions, absurd solutions, limited material, playfulness, uncertain outcomes, audience participation, treating instruments as ready-made objects of expression and treating real life objects as music instruments. She obtained a PhD degree in music composition at Goldsmiths, University of London (UK), supervised by prof. Roger Redgate. She writes pieces for solo, chamber, ensemble and orchestra performances, as well as, projects for electronics, multi-media and interactive settings with audience participation. Bosnić’s works have been performed in festivals, such as: Impuls (Austria), CTM Festival, The International Summer Courses for New Music in Darmstadt, The Festival of Young Artists Bayreuth (Germany), Music Here and Now, International Review of Composers, April Meetings, KOMA – Compositions of Young Authors (Serbia), International Youth Arts Festival in Kingston upon Thames (United Kingdom), Sites + Subjects in Plovdiv (Bulgaria), Timsonia 2018 New Music Festival in Timisoara (Romania) and Delian Academy of New Music in Mykonos 2019 (Greece), where her work was performed by re-known Klangforum Wien ensemble. Her works have been performed around Europe with the support of Ministry of Culture of the Republic of Serbia, Secretariat for Culture of the City of Belgrade, Goethe-Institut and European Cultural Foundation. She was awarded scholarships and annual grants by the Ministry of Youth of the Republic of Serbia, Donaueschinger Muziktage 2014 and Delian New Music Academy in 2019.

The Upgrade for a group of musicans with phones… in an imaginary waiting room from a not-too distant future (2017)
In year 2017, two of my cousins (12 and 14 years old) were constantly watching YouTube videos on their smartphones, whistling and singing a popular song from the radio, and lifting their heads up only when they really had to, in order to give answers to never-interesting questions. I decided to use this scene to create a music piece and imagine a moment in the future that might be close to reality in the moment when their generation takes over leadership in the society. Therefore, The Upgrade is a music theatre that was firstly written as a two-minute opera for a four-member ensemble on a theme of social change. In the meantime, I rearranged the work for a 10-minute chamber orchestra piece, and then rearranged it for a quintet. It was premiered at the International New Music Summer Courses in Darmstadt, Germany in 2018.