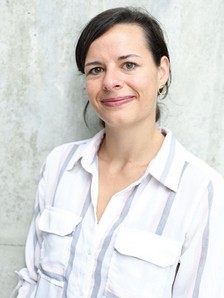 Classical composer and organist, Laurence Jobidon (Canada) pursued her musical studies at the Quebec Conservatory of Music in piano, then in organ (under Danny Belisle). It is in this institution that she made her debut in composition (with Yannick Plamondon) and won the Conservatory Teachers Award, given to the most promising advanced student. Since 2014, Laurence has returned to composition, further training with renowned Canadian composer Andrew MacDonald. She has written pieces for a variety of musical ensembles, from solo to various chamber groups, orchestra and opera. She won the 2015 New Generation Orchestra competition for her piece The White Owl and the Wolf and the 2018 Prix 3 Femmes Mécénat Musica (with Pascale St-Onge, librettist) for her chamber opera L’hiver attend beaucoup de moi, which will see its full premiere as part of Opéra de Montréal 2019-2020 season.

Expansion: une ode au Big Bang pour orgue
This piece depicts the expansion of the universe and the “Big Bang”. Set on an initial cluster representing that initial moment where all matter is condensed to the highest degree, it soon starts to expand semitone by semitone, dynamic by dynamic. Before you know it, that once very hermetic, sterile tangle of matter has now become a suitable ground for life, creation and music. A simple airy question and its response, highly perched above those boiling grounds, mark the entrance of life, a life that is also caught up in the expanding motion of the universe. As the piece unfolds, it grows in complexity and dynamism while always staying connected to the static eternity from which it arose in the first place; the dense quiet matter allowing life to embrace, arms wide open, the infinities of the universe.