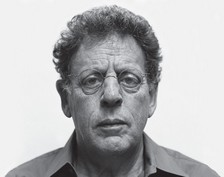 Philip Glass (1937, USA) has had an extraordinary and unprecedented impact on the musical and intellectual life of his times through his operas, symphonies, compositions for his own ensemble, and various collaborations with artists ranging from Twyla Tharp to Allen Ginsberg, Woody Allen to David Bowie. His operas – Einstein on the Beach, Satyagraha, Akhnaten, and The Voyage, among many others – are staged at leading opera houses of the world and rarely to an empty seat. Glass has written music for experimental theatre and for Academy Award-winning motion pictures such as The Hours and Martin Scorsese’s Kundun. His associations, personal and professional, with leading rock, pop, and world music artists date back to the 1960s, including the beginning of his collaborative relationship with theatre director Robert Wilson.
He studied at the University of Chicago, the Juilliard School, and in Aspen with Darius Milhaud. Finding himself dissatisfied with much of what then passed for modern music, he moved to Europe, where he studied with the legendary ped-agogue Nadia Boulanger and worked closely with the sitar virtuoso and compos-er Ravi Shankar. He returned to New York in 1967 and formed the Philip Glass Ensemble – seven musicians playing keyboards and a variety of woodwinds, amplified and fed through a mixer.
The new musical style that Glass was evolving was eventually dubbed ‘minimal-ism’. Glass himself never liked the term and preferred to speak of himself as a composer of ‘music with repetitive structures’. Glass has composed more than 20 operas; eight symphonies (with others already on the way); two piano con-certos and concertos for violin, piano, timpani, and saxophone quartet and or-chestra; film soundtracks; string quartets; a growing body of works for solo piano and organ. He has collaborated with Paul Simon, Linda Ronstadt, Yo-Yo Ma, and Doris Lessing, among many others. He presents lectures, workshops, and solo keyboard performances around the world, and continues to appear regularly with the Philip Glass Ensemble.

Conclusion by Philip Glass, one of the four old masters of Minimal Music, shows all the suggestive power of his compositions, which emerge from the simplest harmonic and melodic structures and create an uninterrupted flow.

Funeral is a second early opera Philip Glass‘ which will be fragmentary presented and which is dedicated to the ancient Egyptian pharaoh Akhenaten. Endless arpeggios on the basis of only two harmonies establish a high-energy repetitive course.