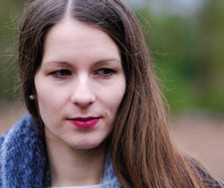 Petra Strahovnik (1986, Slovenia) finished composition at the Music Academy in Ljubljana and Master Composition at the Royal Conservatoire in The Hague. Since her beginning Petra has been following her path of discovering new sounds and she has never been barred by traditional way of how we think about sound and music. She is working on research in art, discovering “mechanical – electronic” sounds, using rare earth magnets and mechanical sound speakers.
Her composition Between East and West for 4 percussionists won the MusMa Festival award and was later performed in 5 countries across Europe. In April 2012, she won the Jury and the Audience award at the international competition Bienale Koper with her piece Awareness.
She received Academic Prešeren Award for her musical achievements (2011). In 2013 she got commission from Diamant fabrik Netherlands to write an Opera (Becoming the System) which the premier was in December 2013 and got amazing reviews. The piece Prana (2018) for symphony orchestra by Petra Strahovnik won 66. Rostrum music competition prize.
Strahovnik’s 2-year project DisOrders, which she is creating in residency with Ensemble Modelo62, combines music and performance art to bring out what lies inside of the people that are afflicted with a mental condition. New works are raising questions about the place and importance of mental health in our society. The project culminates in 2020 with the production of the opera Balerina, Balerina (working title).

Crop circle for violin, violoncello and accordion, 2014
‘Take a moment, breathe in, observe; The mind eternally creates in infinitive time.’
Have you ever had simultaneous conflicting thoughts about how to approach a piece of art? Do we need to have a written explanation or the artist’ thoughts on it? Are we approaching it with a defined perspective?
My proposal would be to enter the space without prepositions, listen, sense, feel, see with open mind and allow yourself experience it fully. We are anyway having our own unique experience.