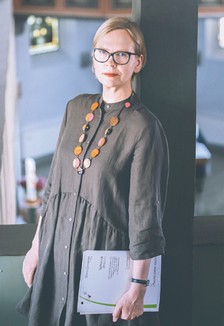 Diana Čemerytė (1974, Lithuania/Germany) graduated music theory at Vilnius Conservatoire in 1994, whereas in 2000 she finished her master’s studies in composition by prof. Osvaldas Balakauskas in Lithuanian Academy of Music and Theatre. Between 2003 and 2006 she studied musicology at the Johann Wolfgang Goethe University in Frankfurt am Main, where she now lives. Diana participated in a numerous composition courses and courses of Gregorian chant, to which belong composition seminars of Toshio Hosokawa, Helmut Lachenmann, Beat Furrer, Adriana Hölszky, Godehard Joppich and many others. Diana Čemerytė is a regular guest at festivals and concerts of contemporary music in Lithuania, Austria, Cyprus, Poland, Germany, Great Britain. Her compositions are featured in various international festivals – for example the Kasseler Musiktage, International Summer Courses for contemporary music in Darmstadt, European Chamber Music Days in Ravensbrück, Festival Gaida, International Thomas Mann Festival, Festival for new music in Lüneburg, Jauna Muzika festival in Vilnius and others. Her works include chamber music, choral music, orchestral works and operas for children.

Jahre ohne Mozart for string quartet and accordion (2015) was commissioned by the Kasseler Musiktage festival in Germany. The first version was written for the string quartet and performed by the Auryn quartet. Mozart in this piece is like a metaphore for the absolute music. Jahre ohne Mozart symbolizes years without music, the time the composer did not have a chance to write music. In this version of the piece the composition starts and closes playing parts of the string quartet Nr. 4 G minor of Wolfgang Amadeus Mozart. His music sustains the whole drama and tragic of the piece that was born through Mozart’s own explorations and the endless desire to write music.