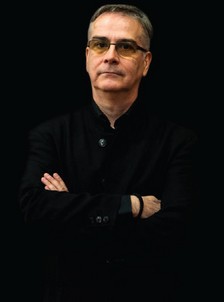 Goran Marinković (1962, Serbia). Marinković holds degrees in bassoon and composition from the Faculty of Music in Belgrade. In 2013, he also earned a doctoral degree in the field of chamber music.
Over the course of his career in performance, he has performed with the Belgrade Philharmonic as its first bassoonist. He is now first bassoonist at the orchestra Camerata Serbica. When it come to his work in the domain of chamber music, Marinković is currently a member of the Construction Site Contemporary Music Ensemble and Novi Sad Wind Quintet.
Works by Marinković have been performed at multiple Reviews of Contemporary Composers as well as BEMUS festival concerts… Among other works, his oeuvre so far includes the following: Hiljade godina belo (White for Thousands of Years) for orchestra; Čakona (Chaconne) for string orchestra; Zvona (Bells) for piano; a String Quartet; Četvorougao (Quadrilateral) for two violins, viola, and bassoon; Three Art Songs, settings of poems by Ivo Andrić; Dvosmisleno (Ambiguous) for clarinet, bass clarinet, bassoon, and prepared piano; Za Oliveru (For Olivera) for piano, harpsichord, and bassoon; Shining, for instrumental octet.
Marinković teaches as a full professor at the Chamber Music Department of the Faculty of Music in Belgrade.

{4} + 1 = 2 for electric viola in five parts
The piece came to being as a result of my collaboration, shared music making, and inspirational locution on sound and aesthetics with my colleague and friend, the violinist Rastko Popović. This music for five electric violas, i.e. for electric viola in five parts, is a new (and shorter) version of my String Quartet, now coloured with electric violas and featuring a new, additional fifth melodic line.
The notion of breath [dah] inherent to space, with a wish to express the condition of the spirit before that which is unfathomable, is impossible to realise inside the traditional laws of manipulating the form, texture, expression, and language of a string quartet or quintet. Trying to touch space and the hopelessness of that pursuit is rendered in the melodic line as the main means of expression, while the internal parts seek to fathom space, infinity, with frequent repetitions of motives, that is, that which is past and already experienced. The repetition underscores curiosity and provokes the moment of expectation. It does not generate the effect of a flow. The work was composed with the aim of understanding the truth of a condition, not that of a flow. The density of the motives concentrates the melodic line, supporting it subtly but permanently, and consistently linking the themes and hence the main underlying atmosphere of the piece.
The four electric viola parts are played from tape (computer) and thus together make up one body, while the performer-soloist plays the fifth part live, over the recording, thus making up another body… All together, there are two sources, thus 4+1 may also make 2.