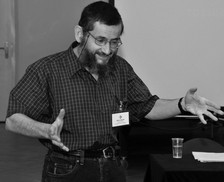 Miloš Zatkalik (1959), composer and music theorist from Belgrade, studied composition at the Faculty of Music in Belgrade with Vasilije Mokranjac and Rajko Maksimović. He had study visits to the USA and UK.

He is a Full Professor of Music Theory at the Composition Department of the University of Arts in Belgrade, Faculty of Music. He was a visiting lecturer at the Universities of Novi Sad, Kragujevac, and Banjaluka and he lectured by invitation in Canada, Norway, the USA, Slovenia, Germany and Australia.

As a theorist, presented papers on many scientific conferences. Published papers at home and abroad, as well as a book on post-tonal prolongation. Research areas: analysis of 20th -century music; relationships between music and narrative; psychoanalytic foundations of music analysis. Author of the first Serbian electronic textbook on music analysis.

Also studied English language and literature and translated a large number of music texts into English.

It moves, it transforms – how could it be otherwise? – but the overwhelming Klangfarben orientation does not favor the discernment of events. We are only approaching the event at the end, when something resembling a motive emerges from the sound mass. Until then, we can only anticipate.