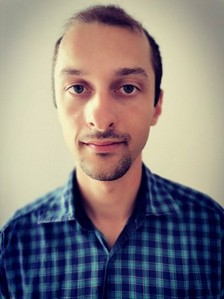 Aleksandar Savić (b. 1991, Serbia). He obtained his BA and MA degrees (in 2015 and in 2016 respectively) from the Faculty of Music in Belgrade, where he studied with Tatjana Milošević Mijanović. He is currently finishing his doctoral academic studies in the same class. His compositions have been performed at the festivals in Belgrade (KoMA, Festum), as well as at many other festivals and concerts in Serbia and abroad – in Czech Republic, Lithuania, Italy, Belgium, Bosnia and Herzegovina. He took part in the international symposium for composers and percussionists Symposium Trstenice in Czech Republic (2015, 2019), where he attended the courses of Jeff Beer, Ivo Medek, Tomáš Ondrůšek, Dimitris Andrikopoulos, Peter Adriaansz and Ulrich Krieger. He also took part in the course for composers Palendriai International Composers’ Course 2016 in Lithuania. He won 11th place at the international competition Rostrum of Composers in Palermo in 2016 (in the category of composers under 30 years) with his piece Planet IX.

The piece entitled 85 for electric viola, live electronic and audio tape is dedicated to my grandfather Milutin who died in October 2021 from coronavirus infection. The audio tape was created by processing the sounds which were recorded in Bučumet, the birthplace of my grandfather Milutin, at winter time. The sound result of this piece is my personal reflection on difficult, above all psychological consequences of the pandemic, on the social as well as on the individual plane.