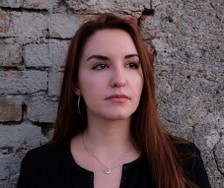 Anđela Milić (b. 1996, Serbia). She completed her MA studies of composition in 2020 at the Faculty of Music (University of Arts in Belgrade) in the class of Svetlana Savić. She is currently a sophomore year student of doctoral studies in the class of the same professor. Anđela Milić received the scholarship awarded by the British music society which enabled her to take part in the workshops of the Gaudeamus musiekweek festival in Utrecht, the Netherlands. She composed music for the theatre play Leto kada sam naučila da letim, directed by Patrik Lazić and based on the eponymous book by Jasminka Petrović; this play had its premiere within the International festival of student’s theatre – FIST 14, and it was subsequently played within the BITEF Polyphony programme of the Belgrade International Theatre Festival – BITEF. Anđela won Second prize at the Neda Depolo competition for creative contribution to radio programmes, for her piece Bezvremena [Timeless], as well as for the electronic piece Hypnagogia in September 2021.

Misli [Think] is a piece for flute, clarinet, violin, cello, piano and electronics. The title suggests the spontaneity of contents, within the instrumental ensemble and the electronic part alike. Various internal states are in question here: from peacefulness to chaos, and the influence of the outside noise on the consciousness.