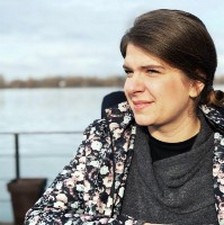 Milana Milošević (b. 1992, Serbia) acquired her BA degree in composition and orchestration in 2016 from the Faculty of Music in Belgrade, where she studied with Svetlana Savić. She is currently in her final year of the Doctoral academic studies, in the same class. Her music was performed at the 9th, 10th, 11th, 12th, and 14th KoMA festivals, also at Festum in Belgrade (2015, 2016, and 2017), International Review of Composers in Belgrade (2018, 2021), and in the USA. She won the Stevan Hristić Award for the academic year of 2015–2016, as well as the 2018 award from the Josip Slavenski Fund. She was among the winners of the RTS Music Production competition in 2019; she won the 2nd Prize at the Neda Depolo competition of the Radio Belgrade 2 in 2019, and the 1st prize at the same competition in 2020. Milošević also won the prize of the Radio Belgrade anonymous competition for radio drama in 2019/2020 (in the category ’Abstract forms of radiophony’), and many other recognitions. She was involved in the adaptation of Vasilije Mokranjac’s scores. In 2021 she prepared the new orchestration and adaptation of Isidor Bajić’s opera Knez Ivo od Semberije.

The piece Snovi malog patuljka [Dreams of a little dwarf] was written for violin, cello, piano and electronics and it was finished at the end of 2021, as a commission from the Belgrade Trio. It consists of three contrasting segments, which are interconnected with electronic sounds.