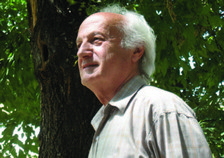 Slobodan Atanacković (1937, Serbia) completed his studies in composition in 1965 in Belgrade (M. Živković). He published his first pieces in 1962 (Variations for Violin and Piano, Vocal Triptych, Piano Trio, String Quartet). Already in those pieces, he revealed as his starting point the contemporary treatment of sound and form. With his vocal-symphony piece Canto eroico, he showed his affinity for songs, creating subsequently an oeuvre of ten oratorios and cantatas. He won recognition in ’absolute’ music as well (Ad vivum, Two frescoes for symphony orchestra, Sinfonia da festa, Chandeleer…) confirming his affinity for the contemporary sound. He won many prizes and awards for his work at public contests. Especially important are the Belgrade October Prize (Akathist) and two awards at the International Composers Reviewin Paris (Two frescoes for symphony orchestra, Sinfonia eterofonica). His pieces have been performed in over fifty countries, recorded on CDs and made available to TV and radio stations, as well as everyone interested in his music.

Sublimationi per tre. Where is, what is music, is the question still troubling me today, just like it has over the past years. A man wakes up one morning, and a song is circling around his head. He wakes up sad, overcome by wars and the force of evil that has swept across the planet. That morning, I woke up cheerful, and I don’t know why. Something mischievous is boiling inside me.
There, the theme is done, and the motifs are appearing in the shape of images from my life. Childhood mischief, adult man’s contemplations. I give thematic images unity. Each one is different, yet made up of the same material. They appear before us holding hands, a choleric and a sanguine, a pathetic and an optimist, decadence and progressiveness. An extraordinary morning.
Everything is spontaneous. Only is the title of the piece estranged. If we look for the meaning in a dictionary of foreign words and expressions, we will find that “sublimation” is a process which turns something into something better. I tried to turn thematic images that stalked me that morning into something better, and it is up to the performers to turn what I wrote into something even better.