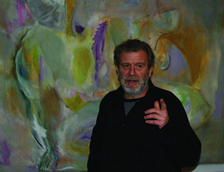 Vuk Kulenović (1946, Serbia/USA) hailed by the Boston Globe as “one of the most important and interesting composers working in the area – or anywhere – today”, has been living and working in Boston, MA, for the past decade and a half since leaving his native Yugoslavia. His music has been commissioned and widely performed by some of the most prominent orchestras in Europe, including the Concertgebouw Orchestra of Amsterdam, Stuttgart Radio Symphony Orchestra, Orchestre National de la Radiodiffusion Française, and the Slovenian Philharmonic Orchestra, as well as the philharmonic orchestras of Belgrade, Zagreb and Sarajevo. The works of Mr. Kulenovic have been performed winning critical acclaim in Europe, North America, Asia, and Australia, among others. His oeuvre includes seven symphonies, sixteen instrumental concerti, an Oratorio, a ballet, twelve film scores, over 30 pieces for chamber orchestra and numerous chamber and solo pieces. Mr. Kulenovic was chosen to write the opening cantata for the 1984 Winter Olympic Games in Sarajevo, the city in which he was born. He has received awards from the International Contemporary Music Bienalle in Venice, Radio France, BEMUS Festival, the Fulbright Foundation, and the Prešern award. He is currently a Professor of Composition at the Berklee College of Music in Boston, MA.

Voces Nocturnae VIIIis the sequel of a series of chamber compositions, most of them created forty years ago for various chamber ensembles, and performed for the first time in ex Yugoslavia, with time spans of several years. All compositions in the cycle are characterized by a nocturnal, lyrical atmosphere with a romantically impressionistic milieu in the backdrop, so it sometimes seems as only one composition, continued or repeated, each time entrusted to a different instrumental ensemble. With a sort of sentimental ’look back’ (as if this composition was a sort of sentimental Proustian Madeleine) – the idea for this piece came to me when I received this year’s Review’s rules: I selected this ensemble’s conception and the number of instruments not because it has the maximum number of instruments according to the rules (eight), but because the number of instruments used symbolically marks the number of compositions in a series of cycles.