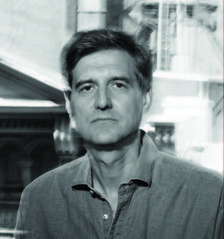 Miloš Raičković (1956, Serbia/USA) is a composer and conductor. He studied composition with Vasilije Mokranjac, Olivier Messiaen and David Del Tredici; and conducting with Borislav Pašćan, Pierre Dervaux, and Herbert Blomstedt.  He studied at the University of Belgrade and University of Hawaii. Raičković holds a Ph. D. from The City University of New York, and has taught in the U.S. and Japan.
He has lived in Belgrade, Paris, Los Angeles, Honolulu, Hiroshima and New York, where he now resides. While in Belgrade, Miloš Raičković was among the founders of the Ensemble for Different New Music (1977), and the Borislav Pašćan Youth Philharmonic (1977). Raičković’s music has been performed in Europe, the U.S. and Japan.
His music is released on CDs New Classicism (Mode Records), B-A-G-D-A-D, and Far Away (Albany Records). The critic Mark Swed describes Raičković’s music as “a unique postmodern response to both minimalism and multiculturalism.”

Waiting for C-A-G-E (2012) is a piano piece written for the publication New Unknown Music: Essays in Honour of Nikša Gligo (Zagreb: DAF, 2012). The book is published in celebration of the 65th birthday of Nikša Gligo, musicologist and the former artistic director of the Music Biennale Zagreb. During the 1970s and 80s, Gligo was supportive of my career, and has helped organize concerts of the Belgrade-based Ensemble for Different New Music in Zagreb.
Waiting for C-A-G-E comprises a musical motive built on the notes-letters of the composer John Cage’s last name. In my only conversation with Cage, one evening in New York, while walking together after a concert, the main subject was our common friend, Nikša Gligo. This year, 100 years after Cage’s birth, this coincidence seemed to be significant. The piece ends with 65 notes, permutations of C, A, G, E.
Waiting for C-A-G-E received its world premiere in Berlin by Margaret Leng Tan, and a Belgrade premiere by Nada Kolundžija.