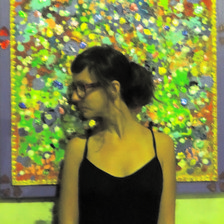 Teodora Stepančić (1982, Serbia) received the degree in piano from the Belgrade Faculty of Music, where she also studied composition. She continued and completed composition studies at the Royal Conservatory in the Hague. Currently, she is living and working in the Netherlands. She is active as a composer, pianist, performer, and improviser in the theater and music theater. Teodora is also a pianist in the ensemble Modelo62, and cooperates with ensembles such as: Asko-Schoenberg, Nederlands Blazers Ensemble, Royal Improvisers Orchestra, Holland Symfonia. She performs throughout Europe, Israel, and Iraq. Currently she is on tour giving concerts in Argentina and California.

The Trio for harp (or piano), viola and violoncello. The main elements on which this composition is based are: intonation – the tempered system with quarter-tones was used, combined with natural intonation based on harmonic series; time – a great part of the composition is divided into systems of the same duration, but different in content, which causes constant changes in tempo while equal time series pulsate and determine the rhythm of the whole form; at the beginning of the second part we could find an interlude which doesn’t follow the same rules; dramatic moment – in this case the dramatic element isn’t directly connected with musical content. It is a moment that happens at the same time in parallel reality and which, just for a second, sticks out into the current events.