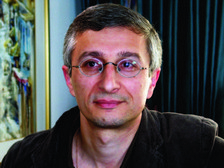 Benjamin Yusupov (1962, Israel). From 1981 to 1990 studied piano, composition, music theory and conducting at the Tchaikovsky State Conservatory in Moscow with Roman Ledeniov, Yuri Fortunatov, Yuri Kholopov, and with Dmitri Kitayenko, one of today’s well-known conductors. He received his Ph.D. degree at Bar-Ilan University (Israel) in 2001.
His works have been performed by the Zurich Chamber Orchestra, the Israel Chamber Orchestra, Dresdner Sinfoniker, Lisbon Symphony, Brandenburger Symphoniker, Orchestra Teatro Communale di Bologna, Belgrade Philharmonic, Bogota Philharmonic, Lucerne Symphony Orchestra, Royal Concertgebouw Orchestra, London Philharmonic, NDR Radiophilharmonie, Israel Philharmonic, etc. Among the eminent conductors who performed his works are: Yuri Temirkanov, Vladimir Jurowski, Kazushi Ono, Mariss Jansons and Eiji Ono. Recent seasons have also seen his performances in Focus Festival, Julliard Theater (2005), Juventus Festival, France (2005), Menton Festival (2005), Zagreb Biennale (2001), Almeida Festival, London (1994), Paris Rostrum (1990), and a large number of Israeli festivals.
Yusupov was awarded the Clone Prize (1992), the Sherover Award (1993), the Israeli Prime Minister Prize (1999), the ACUM Prizes (2002, 2004) and the Landau Award for the Performing Arts (2007).
All of his music is published in Sikorski Musikverlag (Hamburg).
Memories – Crossroads No. 6 for octet (flute, clarinet, bassoon, violin, viola, cello, harp/or optionally percussion) and piano
The piece was commissioned by Storstroems Kammerensemble (The Danish Chamber Players) and first performed by them on the ORIENTEN Festival in Fuglsang, Denmark, on August 22, 2010. The work continues the cycle of pieces called Crossroads and represents the fusion of different cultures, music methods, types of developments.
The piece is dedicated to the memory of my dear father who passed away in April 2009. People don’t often share with their closest relatives their thoughts, feelings, struggles. There are many reasons – different mentality, age, education. But when somebody passes away you discover how many things you wanted to share with him, how many common feelings you lost. Sometimes we are shy to tell simple things and it is so important to share with the person you will never meet again. And why were you so egoistic? A relationship between a father and a son is one of the main issues in the world literature and arts. The music has the privilege to not be concrete and express the main feelings in its pure and most authentic way.
The words and feelings that I never shared with my father are represented in this piece.
The duration of the piece is 12 minutes and it is published by Israeli Music Institute (IMI).