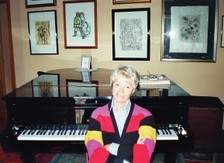 Ada Gentile (1947, Italy) graduated with the degree in piano and composition from the Santa Cecilia Conservatory. Meanwhile she attended Gofredo Petrassi master class in composition at the National Academy Santa Cecilia. Her pieces were performed in prestigious venues such as: Centre Pompidou (Paris), Carnegie Hall and Lincoln Center (New York City), Teatro Reale (Madrid), Concertgebouw (Amsterdam), Mozarteum (Salzburg), Accademia Sibelius (Helsinki), Rachmaninoff Concert Hall (Moscow), Saigon Center (Seoul), Gartner Platz Theater (Monaco), Academy of Performing Arts (Hong Kong), Art Institute (Chicago). Her publishers were Ricordi and Raitrade, while her music was recorded for Ricordi, EDT, and Stradivarius from Italy, Swiss company Tirreno and Canadian – UNMUS. She was the consultant for Biennale di Venezia (from 1993 till 1997), and artistic director of the opera V. Basso in Ascola Piceno (1996/1997). Currently she acts as the President of the Roman section of AGIMUS, and since 1978 she has been the art director of the contemporary music festival held in Rome – Nuovi Spazzi Musicali. She has been elected honorary member of the Amici dell’Accademia S. Cecilia association and member of SIAE.

This composition was created in 2012. It combines instrument’s special traits with the traits of modern and avant-garde language, with a soft look back on jazz (which is also anticipated in the title). The composition is made of three connected segments. The first, introductory segment highlights the changes of tempo and richness of asymmetric accents. The second segment brings improvisation, which is very technically demanding and dynamically coloured with opulence. Here, elements from the first segment of the composition appear to join the second and the third segment which begins with the series of chords the sonority of which during performance becomes ever more airy. The harmonic ostinato functions as the basis on which the melancholic melody is added which appears towards the end of the composition partly altered, achieving a sound arch from the last long chord.