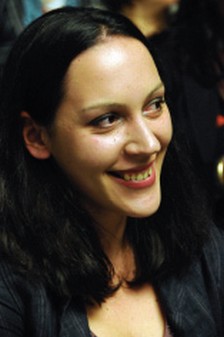 Ana Gnjatović (1984, Serbia) composes acoustic and electroacoustic music, collecting and combining found objects, works, concepts, and ideas suitable for transformation, sonification, generalization and interpretation. She graduated in 2008 from the Department of Composition and Orchestration at the Faculty of Music in Belgrade with Milan Mihajlović. Currently she is attending doctoral studies at the same Department, at the Faculty of Music in Belgrade in the class of Srđan Hofman. Ana Gnjatović attended many courses and workshops in composition, improvisation and vocal workshops, working with composers such as George Aperghis, Chaya Czernowin, Louis Andriessen, Luca Francesconi, Georg Friedrich Haas, Ivan Fedele, Trevor Wishart, Mark Andre. She was awarded the “Josip Slavenski” Fund prize of the Faculty of Music in Belgrade (2009) for the composition Moj plišani oklop (My plush shell), she received a special award and commission by the Sentieri selvaggi ensemble (Milan, Italy) for 2008/2009 season, Summer academy Prague-Vienna-Budapest award in 2005, and 7th Pre-Art Competition for Composition (2013) prize. Her pieces have been performed in Europe, the USA and Japan, and were selected for the festivals such as: Bemus, International Review of Composers, Days of Mokranjac, KoMA, Harpsichord – Live Art, Espressivo (ME), International Harp Festival – Harp Connection, Wratislavia cantans (Poland).

Some metals such as tin, indium, gallium, zinc, and I think it is similar with people too, emit a certain silent crackling sound when they are folded – tin cry. The crackling sound is the result of the change in the crystal structure of the metal: under the influence of mechanical force a large number of atoms move at a high speed in the same direction starting a sound wave. It is impossible to restore the original crystal structure of the metal by melting it.