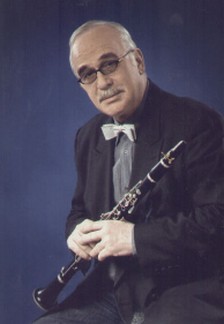 Ante Grgin (1945, Serbia) completed his clarinet studies at the Faculty of Music in Belgrade. For a number of years he had been the leading clarinettist of the Belgrade Philharmonic Orchestra and in 1995 he became the professor of clarinet at the Faculty of Music in Belgrade. As a soloist and chamber musician he gave performances in many cities of the former Yugoslavia, in France, Italy, Hungary, Switzerland, the Czech Republic, Russia, Belarus, China. He has won numerous recognitions in contests in Geneva, Munich, Prague and he has often been a member of the jury in many national and international contests. Among numerous national awards he received for his performance skills and pedagogy, the Association of the Musicians of Serbia Lifetime AchievementAward stands out. His composition opus with interwoven elements of jazz, evergreen and classical music has enriched the literature for wind instruments.

Sonata for alto saxophone and piano was commissioned by the Slovenian saxophonist Lev Pupis to whom it is dedicated. This Sonata is the eighth in a series of sonatas Grgin wrote and dedicated to his colleagues who play wind instruments. In this piece, as in all his other pieces, Grgin stresses the melody above all else using rhythmics and harmonies which are characteristic of jazz. These elements are especially highlighted in this Sonata because the instrument itself, the saxophone as the jazz instrument, has the leading role in this genre. The Sonata has three movements. The first is Allegro, the second Blues and the third movement is Swing.