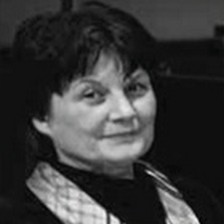 Svetlana Maksimović (1948, Serbia/Canada) is primarily a composer and an educationalist and at the same time she writes about music. In February 2006 she completed her doctoral studies at the University of Toronto with an orchestral piece Četiri muzejske sobe. Long before that, she earned a degree in composition at the Faculty of Music in Belgrade in the class of Vasilije Mokranjac. For many years she taught harmony, counterpoint and composition for educational and creative purposes, in both countries. Pursuing her various interests she wrote several leading essays on contemporary pieces as well as on ecclesiastical melodies from Serbian authors of Byzantine tradition (14th and 15th centuries). Getting to know numerous traditions, from the Far East to Europe, as well as practices of contemporary authors, expanded the knowledge of Svetlana Maksimović. During the past several years she has been writing essays on pieces of Messiaen, Vasilije Mokranjac and Ljubica Marić. From 1996 to 2004 she received several commissions for chamber music, for music festivals or certain jubilees. A series of solo and chamber music pieces were performed at the concert of her original music, on 4 October 2012 in the Main Auditorium of the Assembly of the city of Belgrade. Her most important works are: Sketch for orchestra, Four Museum Rooms, Light Approaching, The Pieces of Time in My Hands, Three Choreographic Etudes, and On St. Nicholas Day.

To the shadow of the predecessors (Seni prethodnika)

Music for four instruments, harp, oboe, violin and cello is entitled To the shadow of the predecessors. It explains the attempt to use simple material and processes to reach the beauty of the moment the composers of previous epochs often presented to us. A modal foundation, decorative chromatics and the secrecy of the perfect fifth (“penta” and “panta” sometimes accidentally alternating over centuries according to some specialists) have been consciously selected beforehand. That makes the composition a sort of a “tribute to faraway teachers” from Monteverdi to Messiaen.