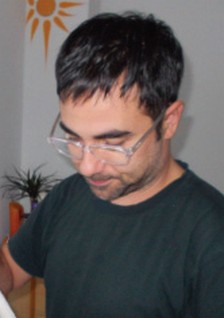 Đorđe Marković (1978, Serbia) completed his studies of philosophy at the Faculty of Philosophy in Novi Sad and composition at the Academy of Arts in the class of Zoran Mulić. He attended workshops led by Richard Barrett and David Fennessy. His pieces were performed at A fest and Kompart in Novi Sad, festival KoMA and 21st International Review of Composers in Belgrade, Kings Place festival in London, 48th Dimitria festival in Thessaloniki etc. He collaborated with the string players from the Symphony Orchestra of SNP (Serbian National Theatre in Novi Sad), piano trio Noster Modus, ensembles London Sinfonietta, DissonArt and Studio 6. He is the recipient of the “Rudolf Bruči”Fundaward from the Department for composition of the Academy of Arts in Novi Sad (2012), he is one of the three composers selected in the international contest Postal Pieces in London (2013), and during his studies he received a scholarship from the Government of Azerbaijan. He is one of the founders and members of the association KNAP and project Improstor, dedicated to new and experimental music he himself deals with.

Pulsaris a piece of ambient character which explores fluid movements of the sound and sonorous colours. As a whole, it was created on the basis of fast repetition of tones which produce the effect of fusion of sonorous granules into long sonorous stacks. Structurally, the composition is realized through a dialogue between two instruments, the sections of which are constantly overlapping, thus creating an endless sonorous pulsation.