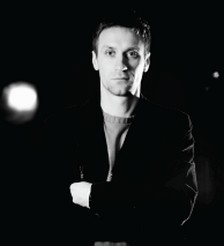 Ljubomir Nikolić (1976, Serbia) studied composition at the Academy of Arts in Novi Sad, with Miroslav Štatkić. He graduated in 2002 in the class of Rajko Maksimović, with the composition Warrior for symphony orchestra. The field of his interest, among others, is music for the theatre. He emphasizes the use of traditional instruments of this region as well as percussion instruments (tarabuka, tapan), which are often present in his works. His music represents a fusion of electronic music with classical and ‘non-classical’ acoustic instruments, and it is based on the principles of multimedia. Among notable performances we should mention: String Quartet No. 2 – A foreign body in the interpretation of the string quartet TAJJ in January 2012, in Rome; the premiere of the composition for two pianos called Shadows in New York, performed by Michael Rose and Miori Sugiyama; choir piece If trees could walk (based on Pero Zubac’s poem), performed by the choir Bajićevi slavuji (Bajić’s Nightingales), in Bonn (2013). A CD with the retrospection of his works entitled Foreign Body has been released as a joint project of Matica srpska and the Association of Composers of Vojvodina, as well as the CD The Song of the Ghosts above the Waters.

The initial idea for creating the composition was assimilation of various rhythmical and melodic motifs from the Balkan region. However, the composer partially steps out of the geographic boundaries of the aforementioned region, thus realizing the desire towards the music with no boundaries, as well as the creation of identical music patterns in various countries as their natural course of action. The initial idea was conceived as the transfer of rhythmical and melodic motifs from the vocal tradition (similar to singing “on voice”/na glas) into instrumental, where the aforementioned motif is developed, made to be more complex and becomes the basis of the entire composition. It is the enrichment of all smaller parts within the structures, which are varied in many different ways, thus creating an ever growing gradation. The listener may “depart” on a journey on which one can hear sounds of a song from Bosnia and Herzegovina, Serbia, silent folk dance from Glamoč, Macedonian “seven”, folk dance polomka from Wallachia and Romanian doina.