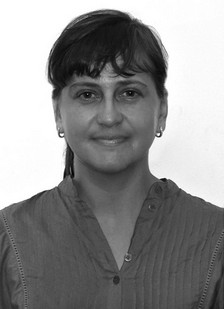 Iulia Narcisa Cibisescu-Duran (1966, Romania) is Romanian composer of mostly orchestral, chamber, choral, and vocal works that have been performed in Germany, France, Italy, USA, Brazil, Australia, Israel and Bolivia. She studied composition with Cornel Taranu at the Academy of Music “Gheorghe Dima” in Cluj-Napoca from 1985, and afterwards orchestral conducting with Emil Simon and Petre Sbarcea from 1991 to 1996, earning diplomas in both subjects, as well as her D.Mus. diploma in 2001. Among her many honors are four prizes in the Gheorghe Dima National Competition in Cluj, First Prize in the Iasi National Competition, Romanian TV Prize in Iasi (both 1996) and Lucian Blaga Prize (1996, 1999). In 2007 she earned The Romanian Union Composers Prize. She also earned two prizes as a conductor in the Craiova Conductors Competition (Constantin and Jean Bobescu Prize, 1995; Filip Lazar Prize, 1996). In 2009 she earned a residency of composition in Connecticut, USA. In 2010, her composition Passacaglia for piano was selected and performed at New World Music Days Festival 2010-Sydney.

In addition, she has given lectures in Germany, Moldova Romania and Israel. She is professor at the Gheorghe Dima Academy of Music in Cluj-Napoca.

Poemsfor viola solo
The composition is conceived as a dialogue of expression between two arts that complement each other: poetry and music. There are two facets of the same creative approach that cooperate to achieve an effect of musical theatre with a single character. Poems for viola solo starts with the recitation of the first poem, the performer holding a mask on his face, this mask being removed at the recitation of the second poem, followed by the musical interpretation of these two poems.

From the musical point of view, the first part is a Kaleidoscope with three main images: the image of tension chords representing the concrete reality, the transcendental image of the harmonics – the hiding places of masks – and the sonorous image of an escape from reality through the idea – represented by melodic and rhythmic structures.

The second part is like a medieval hymn, a faith in God hymn. It is a diatonic music written in the Aeolian mode.