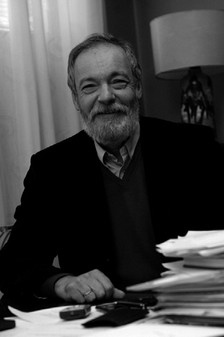 Srđan Hofman (1944, Serbia) obtained the Bachelor’s and the Master’s degrees in composition from the Faculty of Music in Belgrade, with Stanojlo Rajičić. On two occasions he went abroad in order to expand his professional education – in 1974 in Darmstadt, and in 1975 in Stuttgart and Cologne.

He is active as a composer, professor of composition, the founder and the chief of the Tone Studio of the Faculty of Music. He is also engaged in theoretical work related to the issues of contemporary music.

Hofman was the member of a Jury at international contests of Jeunesses Musicales, as well as for the Stevan Mokranjac Award. He was one of the founders and the first selector of the International Review of Composers in Belgrade and the secretary of the National Section of ISCM.

He received numerous awards – among others, the first prizes of the Composers Review for the works Musica Concertante (1994) and Signs (1995), the award from the Serbian Composers Association and the Big Plaque of the Belgrade University of Arts.

The composition Looking at the Mirrors by Anish Kapoor was created in 2010, on the initiative of the harpist Ljiljana Nestorovska, to whom the work is dedicated.

The score of the work records a series of sound reflections on one of the multiplex, distorted, disintegrated and ninety percent rotated reflections of passers-by on the white, “endless” space of a Guggenheim museum hall in Bilbao, filled with Kapoor’s plates-sculptures of different sizes and forms, plated with faceted, shining titanium foils.

The idea of transforming Kapoor’s work into music flow was realized mainly with the following processes:
– “Unpredictable”, “scattered” repetitions and variant repetitions of a small number of simple sound information which do not appear to have a causal relation;
– Multiple micro retardation of sound  and diverse, modulated “echoes” which are generated by the programmed Delay Designer processors;
– Creation of an illusionary unbounded space by using three Space Designers “filled” with the sounds created from the samples of the recorded metal objects and wires;
– Deformation of the “natural” harp sounds

The composition is performed by using the computer program Logic Pro, in whose previously prepared sequence only the commands for activating and programming the work of a sound processor are memorized. Accordingly, the “computer” sound is created “on the spot” as well, since microphones “transmit” sound content from the scene into Logic.