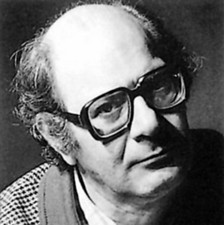 Mauricio Kagel (1931–2008, Argentine/ Germany) studied music, history of literature and philosophy at the University of Buenos Aires. He became the art counselor of Cinémathèque Argentine, dealing with reviews of cinema and photography. There he composed his first instrumental and electroacoustic works. In 1957 he settled in Cologne where, two years later, he founded Kölner Ensemble für Neue Musik. From 1965 till 1975 he was in charge of courses in New Music in Cologne. In 1976 he was appointed chair of Music Theater at the Hochschule für Musik in Cologne – the position created especially for him.

Kagel’s works are numerous and varied. He composed for orchestra, voice, piano and chamber orchestra, as well as numerous pieces for music theater, film music and radiophonic music.

In the early 1960’s the composer was predominantly interested in instrumental theater (Sur Scène, 1959). During the 1970’s he turns to deconstruction of great tradition (Bach, Beethoven, Brahms) confronting it with variété music tradition (Ludwig van, 1970). Instrumental and pieces for theater continue to inscribe themselves into his exploration of the sound and gestures of the music “producer” Charakterstück, Exotica, 1972; Die Erschöpfung der Welt, 1980). The spirit of the theater and theatrical humor remain as permanent major features of Kagel’s music, even in later pieces where he often turns to the resources of traditional instrumentation Études, 1996; Broken Chords, 2002).

The composition Match (1964) for three players was conceived as a game between two cellists and a percussionist as a judge. Referring to its creation, the composer said: “When I woke up on the morning of the first of August 1964, I suddenly remembered that I have dreamt the whole development of the musical work. The dream was incredibly detailed. I still remember all the details, and particularly two cello players. Each of them was almost on the ramp in one of the corners of the stage, and among them, there was a percussionist who played the role of a mediator and a judge. The instructions for the performance and the types of sounds, the sorts of stroke during the performance, gestures, but above all, the emphasized “sports” character of the performance were engraved into my memory… Nine days later, this wonderful performance was repeated throughout the night. This time, I made notes, anxiously trying to define unclear musical bars that I had dreamt in a particular tempo. But, the next morning, when I found out that I was still dreaming the same dream, I left everything aside. Destiny knocked three times on my door and it was time to heed its voice. I wrote this acoustic match in seven days. From that moment, my half-sleep has not reappeared. That’s a shame! I would be happy to compare it with the final score.”

Kontra→danse is the seventh part of one of the most radical Cagel’s works – opera Staatstheater (1967-1970). The author himself has described this work not only as a “negation of opera, but of the traditions of musical theater.” Each of the nine sections includes performers – soloists, choir members, dancers and musicians – in a series of actions that destroy the conventions of the performance. This segment questions the position of dance in the theater, through the idea of opposing it to the traditional dance cannons (against or counter/“kontra” dance) and through the ballet for non-dancers which inverts modern dance.