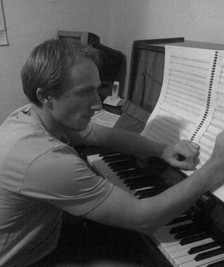 Milorad Marinković (1976, Serbia) studied composition and conducting at the Faculty of Music in Belgrade, in the classes of professors Rajko Maksimović, Vlastimir Trajković and Stanko Šepić. His works have been performed in Serbia and abroad, and a greater part of them is still waiting for their premieres. He received several domestic and foreign awards (Stevan Hristić and Zlatna viljuška/Golden Diapason). He worked as a conductor for church choirs, occasionally conducting his own works.

In his oeuvre, he strives to affirm and actualize his own range of themes as a contemporary necessity of a man-listener. He believes that music is a form of prayer and a form of a basic higher speech which is a secret and a life in one, and many things more…  He believes that the true art does not imitate or depicts life. The true art is life itself.

He is employed as an assistant for theoretical subjects at the Faculty of Philology and Arts in Kragujevac. He lives in Belgrade.

Little Opera (Mala opera), for flute, clarinet, violin, viola, violoncello, piano, and harp, was created with a wish to introduce personalized expression into music, to invoke the thrill and virtuosity of the French baroque opera and the period when opera was a “young” genre bearing enthusiasm, freshness and strength. The elements of solo performance were brought into a chamber texture so that the focus in each movement is transferred to some other instrument of the ensemble; the parts can include demanding soloistic elements. Similarly, the stringing of opera numbers at that time served as a model for the instrumental suite with movements that bring different moods, textural and compositional solutions and different treatments of the instruments involved. The work can be seen as a creative transposition of some of the composer’s experiences from the vocal sphere, but through the visage of the opera. One can hear both scales and treatments that turn us towards the East, where lies, as author stress, the source of our spiritual cradle – Byzantium.

Little Opera can be seen as a procession of both written and unwritten musics… The work wants to be a living part of that vital world.