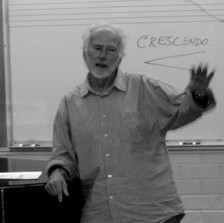 Raymond Murray Schafer (1933, Canada) studied piano at the Royal Conservatory of Music (London, Ontario) and then composition at the University of Toronto. Then he moved to Europe with the aim to improve his compositional skills. Returning to Canada he began his pedagogical career in 1963, at the Memorial University, Newfoundland and then at the Simon Fraser University, Vancouver (1965-75).

Schafer first drew wide attention through his radical experiments in elementary music education in the late 1960s, which resulted in a series of creative educational booklets and several compositions designed for performance by youth orchestras and choirs. His intense interest in soundscape ecology led to his forming the World Soundscape Project (1969, fully functional by 1971), an organization devoted to the critical study of the social and aesthetic aspects of the sonic environment. The result of those interests is his influential book The Tuning of the World (1977), which has been translated into eight languages.

His compositions reveal many concerns, ranging from themes of alienation and political oppression to a fascination with Eastern mysticism and the sounds of the environment. His recent music reflects a strong sense of Canadian identity, through his search for the myth without which, as he said, the nation dies.

Among the awards he has received are the Prix International Arthur-Honegger (1980), Glenn Gould Award (1987), and the Molson Prize (1993), which recognizes outstanding lifetime contributions to the cultural and intellectual life of Canada.

The Crown of Ariadne(1980) is a suite for solo harp and percussions, dating from 1980. This suite is a part of monumental cycle Patria written over a period of forty years. Here Schafercombines the elements of myth, music, ritual in a theatre, trying to revive a mythical times that combine music, magic, culture and nature. In solo piece, the harp player suggests some kind of choreography, performing elaborate movements that link wires and the body of the harp with a full range of percussion instruments that surround it. These chorographical suggestions are emphasized with the creative use of the extended techniques on the basic instrument, bringing it into a contact with his second, percussionist nature. The movements are the following: Ariadne awakens; Ariadne’s dance; Dance of the night insects; Sun Dance.