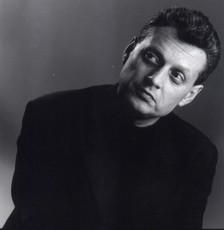 Berislav Šipuš (1958, Croatia) studied art history at the Zagreb Faculty of Arts, and graduated in composition from the Zagreb Academy of Music with Stanko Horvat in 1987. He later studied composition with Gilbert Bosco, François Bernard Mâche and Iannis Xenakis at the UPIC Electronic Studio in Paris (1987), and conducting with Milan Horvat, Krešimir Šipuš and Vladimir Kranjčević. In 1989 he began his collaboration with the Teatro alla Scala in Milan as a ballet rehearser, conductor in the ballet productions and as a rehearser and assistant to opera conductors (1997–2002). At the same time he taught music theory at the Zagreb Academy of Music, where he was engaged as a senior lecturer at the Composition and Music Theory Department and as associate professor in 2005. He was a producer of the Zagreb Music Biennial and its artistic director, and later the director of the Zagreb Philharmonic. The leader of the Cantus Ensemble since its foundation, Berislav Šipuš has appeared as a guest conductor in Bulgaria, Albania, Germany, Italy, and elsewhere. For his compositions (about fifty works) Berislav Šipuš has been awarded at Croatia and abroad with: Zagreb Music Biennial Award (1987), Udine Contemporary Music Festival Award (1987), Yugoslav Music Composition Award (1989), Boris Papandopulo Award of the Croatian Composers Society (2002). In 2004 the Ministry of Culture of the Republic of France awarded him the Knight of Art and Literature Order. For his efforts in promoting Croatian culture all around the world he received the Medal of the Order of Croatian Danica (2010). During this year he received the annual awards Vladimir Nazor and Boris Papandopulo for the ballet The Process, developed in co-production between Croatian National Theatre Ivan pl. Zajc and Music Biennale Zagreb.

Ten Hotti, for voice and chamber ensemble, is the third piece in a series of compositions for chamber ensemble. Tan Hetti, the first one, is written for two quintets (2002); for the 23rd Music Biennale Zagreb, in 2003, the composer has written a second piece in the series, Tin Hatti, for six instruments (flute, clarinet, violin, cello, included one percussions, piano and electronics); in 2010, as a commission of Sounds New Music Festival, Šipuš composed the third piece in that cycle, under the title Ten Hotti, as well for the chamber ensemble.

The music in this series is a result of the composer’s new and growing interest in chamber ensembles, starting in 2001, with the First String Quartet (From the book of forgotten words).