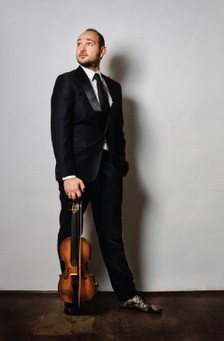 Saša Mirković (1980, Serbia), solo and chamber violist, with a special affinity for contemporary art music. As a soloist, he has performed with Bogdan Varhal’s Slovak Chamber Orchestra, Arte Ensemble, Ljubica Marić Belgrade Chamber Orchestra, Belgrade Strings – BGO Dušan Skovran, Schlesinger Chamber Orchestra, Stanislav Binički Symphony Orchestra of the Serbian Armed Forces, Youth Symphony Orchestra of Southeast Europe, Chamber Orchestra of the University of Arts in Kragujevac, and Ensemble Metamorphosis, which he founded and which he still leads as its artistic director. He acquired his primary and secondary education in music at the School for Musical Talents in Ćuprija and BA and MA degrees at the Faculty of Music in Belgrade, where he is currently in his final year of the PhD programme. He was privileged to work with eminent teachers: Petar Ivanović, Panta Veličković, Đerđ Zazrović, Tomislav Milošević, and Dejan Mlađenović. He is also active as a professor at the Faculty of Philology and Arts in Kragujevac.

Saša Mirković has won numerous first and special prizes, most prominently the First Prize at the Talents for the 21st Century Competition in Slovakia, which enabled him to perform with the Slovak Chamber Orchestra under the leadership of Bogdan Varhal. Also, he has won a number of special awards for contemporary music performance.

So far, his professional engagements have also included playing the first viola in the Ensemble for New Music, Arte Ensemble, Belgrade Strings – BGO Dušan Skovran, Ljubica Marić Belgrade Chamber Orchestra, Schlesinger Chamber Orchestra, as well as collaborations with Žebeljan Orchestra and Belgrade Philharmonic. He has also performed as a member of Kontradance and Kon-trast quartets. Also, Mirković is a member of the regional No Borders Orchestra as its solo violist.