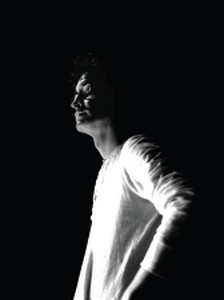 Vykintas Baltakas (1972, Lithuania) – LEN founder and artistic leader, composer and conductor Vykintas Baltakas studied composition with Vytautas Barkauskas at the Lithuanian Academy of Music and Theater, before studying composition with Wolfgang Rihm and conducting with Andreas Weiss in Karlsruhe from 1993 to 1997. He subsequently studied in Paris at the Conservatoire National Supérieur and took a one year course at IRCAM.

Conductors and composers make up two sides of the coin for the busiest of musicians – an attitude shared by Peter Eötvös who was his teacher between 1994 and 1997.

In the meantime he is a regular guest at festivals and with ensembles throughout Europe. Institutions that have commissioned works by Baltakas include the WDR Symphony Orchestra, the Munich Biennale, the Wiener Festwochen/Klangforum Wien,the Ensemble Modern and the Bavarian Radio Symphony Orchestra/musica viva.

Vykintas Baltakas has in recent years conducted renowned orchestras such as the RSO and DSO Berlin, the Bavarian Radio Symphony Orchestra and the WDR Symphony Orchestra as well as ensembles including Ensemble Resonanz, the Ensemble Modern and Scharoun Ensemble. He has also collaborated with composers such as Karlheinz Stockhausen, Georg Friedrich Haas and Dieter Schnebel. In 2009 he founded the Lithuanian Ensemble Network (LEN) of which he is the main driving force.

Baltakas’ works have been awarded with prizes such as the International Claudio Abbado Composition Prize (2003) and the Siemens Advancement Award (2007). CD recordings of his compositions have been recently made by the Ensemble musikFabrik Cologne and the Ensemble Modern.

Recitativo for violin and piano was composed in 2014 under the commission by the Queen Elisabeth International Music Competition of Belgium for the semi-final of the 2015 violin competition. In the composer’s words, “it is sound what I am most concerned with, when I am composing. To me sound can be like a living being – sometimes with its own wishes and caprices. I try to understand it, change it, sometimes I have to accept its intrinsic behaviour and change my own perspective. The Recitativo-soundis light, flighty, impulsive, shy. It is difficult to catch. It feels like it wants to tell you something but it hesitates. The impulses from piano can encourage it. The stronger these impulses are – the more can be said. Imagine a feather floating on a breeze. All you want to do is to keep this feather floating…”

According to Baltakas, Commentum is a free rendition of Chopin’s Introduction after listening to it again. Without any alterations, predilections and attempts at ‘modernization’, but rather like a spontaneous expression of one’s personal opinion.

A piece for violoncello and piano was written in 2011 for David Geringas and Ian Fountain as a commission from the Vilnius Festivals. The premiere was held on 2 June, 2011 at the Lithuanian Philharmonic Hall.