Themus Ensemble plays compositions where the written scores contain theatrical indications. They blend in together and convert into improvisations. They insist on calling these pieces theatrical music or musique théâtrale and not musical theatre or théâtre musical. The music, the score, the gestures and musicians become one and the same. 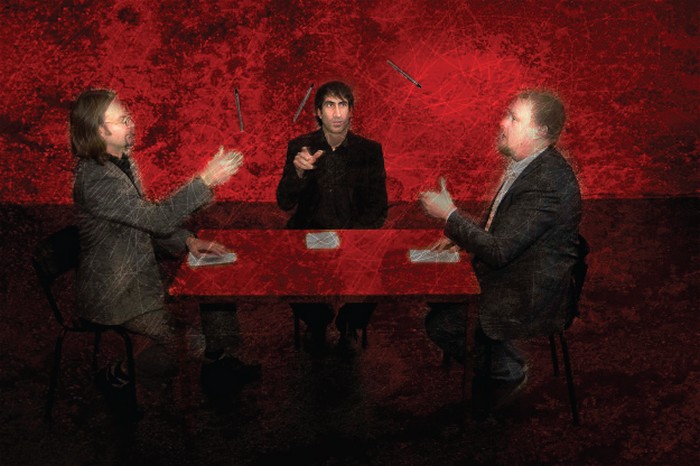 The Box is a newly composed version of a previous concert called „Tick Tack Table”.

„The Box” is about the power of sounds that come out of a fairly small box and dominates its surroundings. This provides a visually powerful movement of the three musicians on stage, and a combination of sounds. Casual, everyday objects turn into Music instruments.

Mansoor Hosseini studied at Music Conservatories of Brussels, Paris and Gothenburg. He is specialized in theatrical music and has studied and conducted research on George Aperghis and Mauricio Kagel. Mansoor’s Kung-Fu practices influenced his theatrical music and choreography in his compositions (www.musicalmo.com). He has worked with several video artists and dancers as well as theater projects. His compositions have been performed by ensembles in various music and theatre festivals in the USA, Europe and South America.

Tony Blomdahl has studied composition with Professor Sven-David Sandström at Gotland school of composition, and later at the Gothenburg University. Blomdahl mostly composes music for smaller chamber ensembles and electro acoustic music and works with sound art and installations. Larger works include symphonic orchestral pieces and string orchestra. His music is mainly performed in Sweden, both on national TV and the national radio, but it has also been performed abroad in France, Albania and the USA (www.tonyblomdahl.se). Tony´s operetta Laika, the space dog, for children, has become a successful and toured project. Tony is also director of Geiger music group which has created music festivals since 2007.

Andreas Hall has studied the saxophone and clarinet at the Music University of Gothenburg with Professor Sten Pettersson. He was taught improvisation by Anders Hagberg and Anders Jormin. Andreas himself has been teaching saxophone, clarinet and flute in several music schools in and around Gothenburg since 2003. Andreas has played at different jazz and folk music festivals with his wind quartet. The group Mess and the Ingvar Andersson quartet have occasionally invited him to perform with them at various jazz festivals and jazz clubs in and outside Sweden. We also find a wide range of contemporary music in his repertoire.