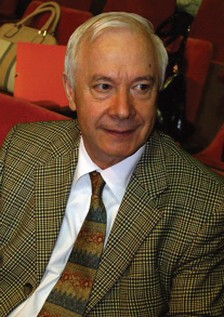 Ulpiu Vlad (1945, Romania) is a graduate of the National University of Music Bucharest, where he studied composition with Anatol Vieru. He participated in a specialization program for foreign students at the Academia di Santa Cecilia, Rome, with Virgilio Mortari. He worked as a scientific researcher, an editor, as director of the Romanian Musical Publishing House, and later as Music department director at the Romanian Ministry of Culture. He hold PhD, and for almost twenty years (1993-2012) he was a professor at the National University of Music Bucharest. Since 2006 he has been Vice-President of the Union of Composers and Musicologists of Romania and since 2013 President of the Romanian Section of the International Society for Contemporary Music. Some of Ulpiu Vlad’s numerous and divers works were played also out of Romania, in Germany, Holland, U.S.A., Israel, France, and are published by the Editura Muzicala Bucuresti (Musical Publishing House – Bucharest), the Carciofoli Verlagshaus – Zürich, and Musikproduktion Höflich – München, and are recorded on CDs. His honours include the George Enescu Prize of the Academy of Romania in 1985, Prizes of the Union of Composers of Romania (in 1991, 1995, 2000, 2003, 2006, 2009), and The Order of Cultural Merit in Officer Rank, 2004.

Sonorities and Forget-me-no – a piece for flute and piano is based on a series of strongly individualized structures succeeding or merging into each other, thus building up tension into an expressive arch, which mostly rests on the evocative character of the work. Composed in one movement with several inner sections – which are sometimes clearly delimited – the piece works with modal constructions that are differentiated with regard to sound pitch and covers in an original way the entire chromatic range. Sonorities and Forget-me-not is one my works that is less innovative, but lays emphasis on expressivity. I believe in a music that is akin to nature, in which universally valid laws operate through infinite nuances, both on the level of the work itself, as well as on the level of the finest components, with a direct bearing on the interpretative act. What is essential is the soul of the music, and this is conjured by merits. The privilege of working with a superior energy – of creating systems of artistic generation, accumulation and transmission – lies within ourselves; it is important that we uncover it and set it into motion. (Ulpiu Vlad)