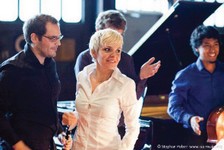 Sonja Mutić (1984, Serbia) composer and performer, graduated from the composition department at the Faculty of Music, University of Arts in Belgrade, in the class of professor Zoran Erić. She is currently attending PhD studies at the same faculty, and is composer in residence at Künstlerhaus Boswil in Switzerland (2014-15). She has attended various masterclasses in composition, improvisation, electronic and film music and, among others, cooperated with numerous ensembles. Her music was performed in Austria, Belgium, Netherlands, Switzerland, Great Britain, Republic of Macedonia, Bosnia and Herzegovina and Serbia, at festivals, such as Gaudeamus Muziekweek, NJO Muziekzomer, Boswiler Sommer, MQ Summer of Sounds Wien, isaFestival Zeitenwenden, Culturescapes Balkans, Autumn Music Festivities, 22nd International review of Composers, KoMA, and broadcast on Swiss, Dutch and Serbian radio stations. Her piece disappearing particles appeared on a CD compilation Processions by pre-art ensemble, released in 2014. In it for accordion solo has been published as a part of Contemporary serbian music for accordion (2015). She is a winner of the 2nd prize at the 20th Young Composers Meeting (2014), 2nd prize at the 7th pre–art competition for composition in Southeastern Europe (2013) and Josip Slavenski award FoM Belgrade (2011).

borderline refers to borderline personality disorder, which is manifested in the form of self-destructive, impulsive behaviour, mood swings and emotional instability.