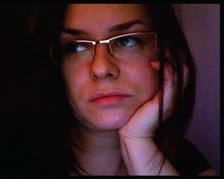 Works by Ognjanović have been performed in Greece, England, Lithuania, Macedonia, Hungary, Germany, Czech Republic, Japan, Austria, Finland, the US, and Serbia. She has participated at numerous festivals, such as the International Review of Composers, Salisbury Festival, Elektronische Nacht, Connecting Media, Making New Waves, Bipolar, Music in the Global Village, Klangwerktage, ICMC2008, ENTER, SIGGRAPH Asia2009, Pécs – The 2010 European Capital of Culture, KOMA, and ISCM WNMD 2013. She is a permanent member of the European Bridges Ensemble (EBE), a multimedia ensemble specialising in Web-based composition and performance.

Wrecks of Silence, a piece for mezzo-soprano, baritone, violoncello, piano, and electronics (2014) – The chief procedures involved in the making of the work’s electronic layer includes multiple deceleration of sonic and extremely short musical samples taken from the banal melody of a music box by means of the stretching method, their subsequent harmonisation, moving of the tonal basis, and editing of complete models.

The texture of the ensemble music ranges from attempts at timbral assimilation into the electronic sound all the way to total mutual contrast. The work makes use of two verses from Emily Dickinson’s poem I Felt a Funeral, in My Brain. The piece was commissioned by Construction Site New Music Ensemble.