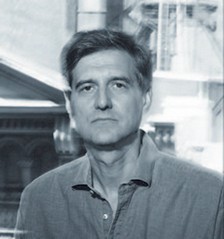 Miloš Raičković (1956, Serbia/USA), composer and conductor, was born in Belgrade in 1956. He has lived in Belgrade, Paris, Los Angeles, Honolulu, Hiroshima and New York, where he now resides. While in Belgrade, Milos Raickovich was among the founders of the Ensemble for Different New Music (1977), and the Borislav Pascan Youth Philharmonic (1977). Raickovich’s music has been performed in Europe, the US and Japan.

Milos Raickovich studied composition with Vasilije Mokranjac, Olivier Messiaen and David Del Tredici; and conducting with Borislav Pascan, Pierre Dervaux, and Herbert Blomstedt. He studied at the University of Belgrade, and University of Hawaii. Raickovich holds a PhD from The City University of New York, and has taught in the US and Japan. Raickovich’s music is released on the CDs New Classicism (Mode Records), B-A-G-D-A-D, andFar Away (Albany Records). The critic Mark Swed describes Raickovich’s music as “a unique postmodern response to both minimalism and multiculturalism.” (http://amc.net/MilosRaickovich)

Nadja’s Kolo (2014), for piano or toy piano, is written in memory of my friend Nadja Tesich, who died in New York in 2014. Nadja was a unique person, a writer, an actress, a fighter for social justice and an antiwar activist. She published novels Native Land, Shadow Partisan, Far from Vietnam, andTo Die in Chicago.