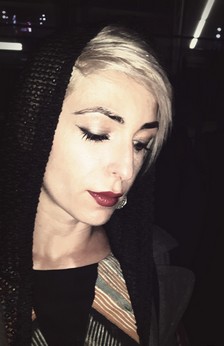 Darija Andovska (1979, Makedona) graduated composition in the class of Goce Kolarovski – Faculty for music, Skopje, Macedonia; got her MA degree in the class of Isabel Mundry- ZHdK in Zürich, Switzerland; currently enrolled on DA studies, under the mentorship of Chaya Czernowin, Harvard Institut, USA. Author of chamber, solo, orchestral, symphonic, choral music as well as film music, theater, dance and multimedia projects.
Her works have been performed in Albania, Armenia, Austria, Azerbaijan, Bosnia & Herzegovina, Belgium, Bulgaria, Canada, Croatia, Denmark, England, France, Germany, Georgia, Italy, Ireland, Macedonia, Mexico, Montenegro, Norway, Poland, Romania, Russia, Serbia, Slovenia, Sweden, Switzerland, Turkey, Ukraine, USA.
Was published and won several competitions, nominated and awarded as well for film and theater music all over the world.
Part of MusMA (Music Masters on Air) for 2013/2014. Nominated (2014) and twice awarded (2013, 2015) the “Virtuoso” award for Best Composer in Macedonia. Won the Cultural Honor Award of the City of Zürich- Best Composer in 2014. Macedonian music ambassador for the project CEEC 16+1 between China and central- and east European countries for 2016/2017.
Works as an associate professor at the Faculty for music and Faculty for dramatic arts in Skopje.

Illuminationswas written in 2001, during the civil war in Macedonia, when I was contemplating strongly whether it’s better to go out and save at least a dog’s life or to write a string quartet. I guess I did both. The clashes in my being at the current time are very obvious in the first and third movement, called Illuminations I and II- in the first movement: everyday world/machine VS spirituality (thus I use quotes from the macedonian church chants, whispers and percussive sounds), while in the third movement humor is the way to escape or to survive the difficulties of life (thus the finger snapping and singing). The middle movement is called Meditation- a transitioning and transcending state of mind and being.